The Art of Wylie

Wylie city officials believe that accessible and appealing public artwork is as important to quality of life as roads, utilities and parks. Since 2006, the city has dedicated 1 percent of its capital improvement project fees to a public arts program. The funds are used to create artwork that enhances citizens’ experiences at municipal facilities, including the library, city hall, Public Safety Complex, parks, a fire station, the disc golf course, and the hike-and-bike trail.

Members of Wylie City Council demonstrated their commitment to the public arts program by passing an ordinance dedicating the CIP funds. The Public Arts Advisory board was created, made up of members of the community, and Carole Ehrlich was appointed to serve as staff liaison to the board.

The PAAB determined the location and budget for each piece, and input was solicited from stakeholders. The board then issued an open call to artists, and a selection committee, made up of art board members, citizens, consultants, artists and City staff, narrowed the list of artists to two or three semifinalists per project. The public was invited to view their presentations, which often included scale models of their designs, and give input into what public art they’d like to see. City Council then issued final approval.


'Heroes of Wylie' - Sid Henderson
The 6-foot-3-inch bronze sculpture, "Heroes of Wylie," was created by Tucson, Arizona, artist Sid Henderson. The piece depicts a firefighter and police officer standing side by side and was dedicated Sept. 11, 2015, at the Public Safety Building. 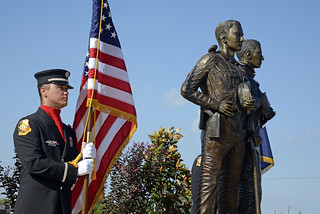 Members of the Wylie police and fire departments gave input into the design and emotion of the sculpture, including their wish to have uniform elements depicted in accurate detail. Plaques engraved with "Fireman's Prayer" and "Police Officer's Prayer" are featured on its base, along with a plaque dedicating the piece to the men and women of WPD and WFR.

The $41K project was funded through Wylie's Public Art Program; "Heroes of Wylie" was funded entirely by money rasied through special events such as the Wylie Arts Festival.

The dedication date was chosen to pay tribute not only to those currently serving the Wylie community, but also to remember and honor those who lost their lives in the terrorist attacks of 9/11. "I hope that, as Wylie citizens and visitors view the statue, they will be reminded to honor the people who put their lives at risk on behalf of their families, their friends, their neighbors, their fellow citizens, and the strangers who come wtihin our city limits," Mayor Eric Hogue said.

Prominently located in front of the municipal complex, ”Something Real” consists of seven granite monoliths spaced over 385 feet in progression. “This piece is about the site and the city – its past and present, its people, and its nature as a modern civic center,” said artist Steve Gillman. “Its monumentality lends dignity and a sense of place while inviting visitors into Wylie’s new Municipal Complex.”

The columns range in height from 13 to 18 feet and weigh more than 35,000 pounds each. One side of each is engraved with a quote from historian Beb Fulkerson’s newspaper column, “The Town of Wylie,” published in Wylie’s earlier days.

Gillman is an award-winning and recognized artist with many years of experience in public art. In 2008, he was recognized by the Americans for the Arts for having one of the best public art projects of the year.

Located in the City Hall courtyard, this bronze work comprised of a column, arch and geometric shapes represents the community gathering places found within cities of ancient Greece and Rome. Known as the agora, it was the center of civic, commercial and educational activity.

These open, tree-lined squares were surrounded by columned buildings, or stoas, which often served as marketplaces, government offices and places of learning, much like modern town squares, civic buildings and libraries.

In Teatro XIX, the arch represents the gateway or passage into the agora, and the column depicts the stoa. The addition of the sphere and cone references the strides in geometry and learning during the Greco-Roman period.

Teatro XIX was Tongeren’s last commissioned piece before his untimely death in 1987 at age 43. His work is on display in many notable museums including the Guggenheim in New York City, the Brooklyn Museum of Art and the Dallas Museum of Art.

Originally displayed in Atlanta, Ga., Teatro XIX was donated to the City of Wylie in 2010 because of its significance to the modern day city hall, library and recreation center ... Wylie’s community gathering place.

‘Voices of Wylie’ – Living Lenses
Po Shu Wang and the late Louise Bertelsen of Living Lenses designed this 13-foot-wide by 7-foot-tall stainless steel interactive sculpture located in the breezeway between the Smith Public Library and Wylie Recreation Center. “Voices of Wylie” features a

sequence of hemispheres that spiral toward each other surrounding a complete sphere at the center. Inspiration for the shape was drawn during a public meeting where citizens recalled Wylie’s rich history as the “Onion Capital of the World.”

The sculpture conceals an outdoor speaker connected to two keyboards: one in the recreation center and one in the library. Visitors are invited to type their thoughts, expressions and emotions, which are translated into Braille text dots and turned into musical tones through an electronic sampler.

“Voices of the community will drive an on-going symphony that is Wylie’s very own,” said Wang. “The body from the recreation center and the mind from the library will come together as a whole being.”

The first of Wylie’s public arts installations, this 14-foot-long wall features seven mosaic panels depicting Wylie Fire Rescue’s rich history and service over the last 100 years. Artists Larry Enge and Char­lotte Lindsey, known as Montage 48/61, worked from photographs, plac­ing thousands of tile pieces together to create both black-and-white and color images. Several of the panels were inspired by photographs taken by Rick White, a former mayor pro tem, and his wife Alicia.

“The artwork is dedicated to the past and present members of Wylie Fire Rescue in recognition of their selfless service,” said Randy Corbin, fire chief when the piece was unveiled. “The fire department is honored to be the site of Wylie’s first public art project as we celebrate 100 years of fire service.”

“’Catch’ stirs the imagination of children and adults,” said Kathy Spillyards, a councilwoman and member of the Public Art Advisory Board at the time of the sculpture’s dedication. “The piece is physically and visually interactive … evoking a feeling of movement … the ideal installation for an active community gathering place that hosts thousands of sports league participants and visitors every week.”

Madeline Wiener, who has been sculpting since 1974, creates art for public spaces that reflects the culture and character of the community and facilitates interaction.

'Up Your Game: Octopitcher vs. Batterpillar’ – Johnny Edwards
As guests approach the baseball complex at Community Park, they are greeted by two figures, one on either side of the walkway. Ten-foot-tall Batterpillar holds five bats, ready to take a pitch from his adversary, Octopitcher; at 9 feet tall and 15 feet in diameter, his octopus foe is a formidable one.

“It’s a classic battle between two imaginary giants of the baseball world,” said artist Johnny Edwards. “Who would want to face a ball-hurling octopus on the pitcher’s mound? It’s an epic battle of superstars.”

The “superstars” are hand sculpted out of cement over steel armatures, then finished to appear to be wood carvings, an eye trick Edwards said he hoped would be a lighthearted combination of whimsy and substance. “Although the design and concepts are kind of silly, the execution and mastery of materials give the subjects respect and a level of class.”

‘Wide Awake Wylie’ – Roger and Karen Nitz, K&R Artworks
Wylie’s 125th anniversary was celebrated in 2012 by the addition of a 12-foot-tall, 60-foot-long mural entitled “Wide Awake Wylie,” a nod to the city’s early custom of keeping stores and night spots open as the railroad brought more and more guests to town.

The Nitzes incorporated many aspects of modern Wylie culture into their design: a determined young girl rides front and center in the annual Pedal Car Race, and Mayor Eric Hogue is depicted, along with local businessman Raymond Cooper, who’s driving the train. Landmarks and businesses such as the Brown House, Wylie Flower and Gift and The Wylie News are included and, in honor of the special anniversary, the number “125” is hidden throughout.

The mural is located on the side of an existing building, one of the first ones visible as guests enter the historic downtown area.

'RESCUED' – Robert Barnum
This aluminum and corten steel sculpture celebrates the bond between rescued animals and shelter staff, as well as those who adopt animals in need of forever homes. Its plaque says its mission is to, "Honor the noble and dedicated work of the Wylie Animal Shelter Staff and volunteers and recognize their efforts to care for and find forever homes for lost animals." The artwork depicts a child holding a dog, standing 12 feet tall, and shelter workers holdilng animals, 21 feet tall.

This artwork is located at the Wylie Animal Shelter, 949 Hensley Ln.

‘Entwine’ – Michael Szabo
Standing over 32 feet tall and created from stainless steel and bronze, “Entwine” seems to dance like prairie grasses in the wind. Dramatic lighting and integrated glow at the focal point of the sculpture create a beacon for drivers and pedestrians. Szabo said that, despite the fact that Wylie has more than tripled its population in the last 15 years, it has not lost any of its identify; instead, it has “struck an admirable balance between its deep roots and the future growth it will undoubtedly be part of.”

It’s located near the intersection of Country Club Road and FM 544, along the municipal complex hike-and-bike trail.

‘Prairie Crossing’ – Michael Szabo
Echoing the materials of its companion piece, “Prairie Crossing” features ribbons of stainless steel and rich textured bronze, reaching 11 feet at its highest point. Evoking the beautiful chaos of prairie grasses, the arches give the visitor a feeling of being in the prairie that has defined this region. By day, arches provide shade for rest or conversation; at night, in-ground up-lighting provides a dramatic effect from the street or for those approaching for an evening walk.

“Prairie Crossing” is on Brown Street at the other end of the trail.

‘Lift-Off’ – John Davis
“Lift Off” is the kinetic sculpture located at the disc golf park. Davis used the circle and the spiral to form a colorful and gestural celebration of the essence of the park. The spiral suggests energy and propulsion of the disc; at the opposite end, a wind vane in the shape of a disc connects to the airborne aspect of the golfing activity and can give golfers an indication of wind direction, which may affect the path of long throws.