If there had been no railroad – or if it had steamed through a different part of Collin County – there would be no Wylie.

Wylie’s story began during the “Golden Age” of railroading, an era that lasted from about the 1880s to the 1920s and changed the economic climate of the country. Although some U.S. citizens were troubled by trains – one Ohio school board claimed them to be “a device of the devil” and that travel by train would cause a “concussion of the brain” – no one could argue with the efficient manner in which rail transported goods. 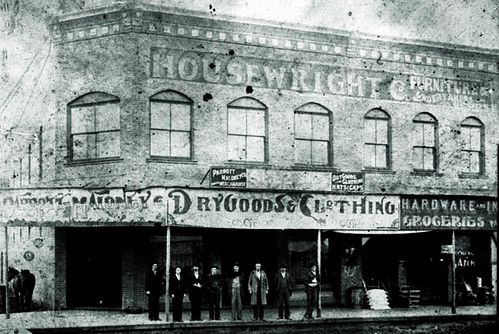 Before there was Wylie, there was a small town called Nickelville. Some say it was so named because a nickel store was located there, and some say a local townsperson joked that no one who lived there “was worth a plug nickel.” In 1885, word spread through Nickelville and neighboring communities that the Santa Fe train tracks were fast approaching, bringing prosperity along for the ride.

After a number of surveys were made, however, railroad right-of-way engineers decided to lay track to the north of Nickelville. The agent and engineer in charge was Col. W.D. Wylie, from Paris, Texas, and legend has it that he was anxious to have a town named after him. The colonel promised he would do great things for this fledgling town if it bore his name, including, some say, buying new baseball uniforms for the local team. Who could resist a campaign promise of that magnitude? Dr. John Butler, Nickelville’s earliest settler, submitted Wylie’s name to the town leaders, and, when the application for the new post office was received June 10, 1886, the name became official. Col. Wylie purchased 100 acres of land and began dividing it into city lots. Wylie was incorporated in November 1887 along the railroad right-of-way.

The first Gulf, Colorado and Santa Fe Railway train rolled into Wylie on Oct. 13, 1886, with Dallas dignitaries on board. A brass band played, welcoming speeches were given, and everyone was invited to have a free drink when complimentary kegs of beer rolled off the train.

Col. Wylie had planned for the auction of his lots to coincide with the arrival of the train. Bidding was brisk among the locals and visitors from Dallas; whether the free beer had anything to do with the sales cannot be proven. The first lot sold for $150 with Wylie soon realizing approximately $8,000 to $10,000 in profits from the sale – or so the story goes. The following year, the St. Louis and Southwestern (Cotton Belt) rail line arrived in Wylie from Greenville.

Wylie’s agriculture roots were also taking hold, and, by the mid-1910s, shipping by rail was becoming more and more profitable. Hogs were shipped weekly as well as produce. Cotton was the leading crop and was known as “king.” Schools were scheduled around the growing season so children could help out in the fields. Laborers came to town for cotton baling work, often sleeping on the open platforms near the downtown cotton gins. King Cotton shared the throne with the onion. Until the early 1960s, Wylie was known as the “Onion Capital of the World,” and an onion shed could be found by the Santa Fe tracks. Wylie became famous for the sweet white onions grown here. Migrant workers came to town and, during onion topping season (when the above-ground, green part of the onions died and fell over, signifying it was time to harvest them and remove that leafy portion), washed the onions in big tanks downtown before shipping them off to market.